These excerpts of historic documents are included as background to the 360° vignette in Teaching Ourselves. Rather than depicting specific individuals, the characters in the scene are composites based on people, issues, publications and events relevant to the theme of this module: The contributions of Reconstruction laws and institutions to the modernization of the South. In one example of major reform, Republican-led state governments, which had numerous African American legislators, created the region’s first substantial public school systems. These primary documents offer a glimpse into those early schools. The spelling and syntax are historically accurate.

The students in the “Teaching Ourselves” scene represent a group of newly freed children of varying ages who are attending school for the first time. The Bureau of Refugees, Freedmen, and Abandoned Lands, also known as the Freedmen’s Bureau, was established in the War Department by an act of Congress on March 3, 1865. The Freedmen’s Bureau often assisted with the education of freedpeople. One officer in each state was designated to serve as “general Superintendents of Schools.” These officials were to “take cognizance of all that is being done to educate refugees and freedmen, secure proper protection to schools and teachers, promote method and efficiency, correspond with the benevolent agencies which are supplying his field, and aid the Assistant Commissioner in making his required reports.”

This report by the Chairman of the Board of Education for Freedmen praises the behavior of the children at one of the new freedmen’s schools and mentions that the schools seem to lessen racial prejudice among white people.

Excerpts from the report of the Board of Education for Freedmen, Department of the Gulf, submitted on February 28, 1865.

CHARACTERISTICS OF THE PUPILS

The pupils, as a class, are orderly, industrious, and easily governed. They are exceedingly grateful for any interest and kindness shown to them. It is the testimony of our teachers, who have taught in both white and colored schools, that these children do not suffer in comparison with the white in the activity of most of their faculties, and in the acquisition of knowledge. . . .

Another habitude of these colored children is their care of books and school furniture. There is an absence of that Young America lawlessness so common on Caucasian play grounds. The walls and fences about the colored schools are not defaced, either by violence or vulgar scratching. They do not whittle or ply the jack-knife at the expense of desks and benches. It may also be said that the imagination of these juveniles is generally incorrupt and pure, and from the two most prevailing and disgusting vices of school children, profanity and obscenity, they are singularly free.

INFLUENCE OF THE SCHOOLS.

The beneficial influence of these schools is not limited to the pupils. The children go from the school-room to their homes as Instructors. One of the immediate and visible results, is upon the colored adult and his household, in the increase of family respect, the promotion of cleanliness and thrift, and generally and in equal degree in those good effects that like influences have produced upon the populations of other races.

Another almost immediate and marked influence of these schools is seen upon the white people in the lessening prejudice, in the admission of the African's ability to learn, and his consequent fitness for places in the world, from which we have hitherto excluded him. . . .

Chairman Board of Education for Freedmen, ........ Department of the Gulf.

Excerpts from the report of the Board of Education for Freedmen, Department of the Gulf, submitted on February 28, 1865. Library of Congress American Perspectives Collection

The teacher in the “Teaching Ourselves” module represents a recent graduate of a normal school, or teacher training college. Teachers in Black schools often became integral members of the community. In this 1867 letter to the Freedmen’s Bureau Superintendent of Education, a teacher demands that the government issue assistance to Black people in her city as well as to poor whites.

Sir: I am requested by a colored woman, of our city, to write you. asking information about rations. The agent here–Mr McCutcheon–says that the provisions he has on hand is not for negroes, but for the poor white women. And have actually refused to issue any, to any of the colored applicants for assistance. Notwithstanding some of them, is in as much need, as the poor white women, referred to. The lady who requested me to write this, has a large family of little ones, and she is their sole support. I know her to be an industrious hard striving woman–yet she cannot get any aid, from the subsistence agent here, because she is not white and happened to get a husband killed, fighting to destroy the government. It certainly must be a great crime to be a Negro, I cannot view it in any other light. We the colored people have done all we could to aid the government, in her hour of need, and now our services are no longer needed, our women may suffer hunger,–when it is in the hands of the agents relieve their wants–simply because are black. Please write and inform me what course to pursue. Yours Respectfully

Sir A communication has been received at this from Wm. V. Turner, Wetumpka, stating that you refuse to issue any of the Government corn and bacon, in your charge, to the Colored people saying that the provisions are not for the negroes but for the poor white woman. I have enclosed Mr Turner an order, directing you to place on your distribution list a family whose case he more particularly refers to. The Asst Commissioner directs me to say that unless the rations intrusted to you are destributed without regard to color, the supply of provisions will be cut off from your district. Very Respectfully Your obdt servant 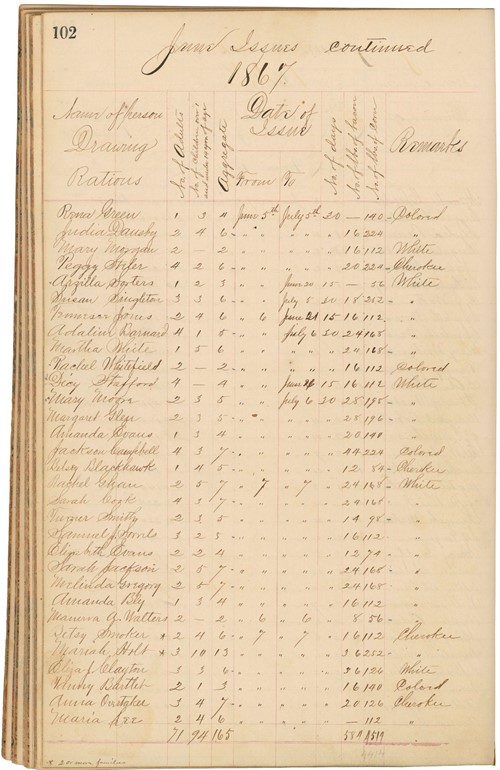 Relief (Rations) Rations Issued at Fort Smith, Arkansas, in June and July 1867 Names of person, no. of adults and children, Dates of issue, no. of days, no. of lbs. of bacon and corn, and Remarks [race]. Arkansas, Fort Smith (Sebastian County), Register of Persons Drawing Rations M1901, roll 8, National Archives

In the “Teaching Ourselves” vignette a community is using its church as a school, as was often the case during Reconstruction, as whites refused to make space available to African Americans. The photograph below is of Tolson’s Chapel in Sharpsburg, Maryland, near the Antietam battlefield. A congregation of freedmen organized by John R. Tolson, a Black Methodist preacher, built the church in 1866. Between 1866 and 1899 the building served as both a church and a school. 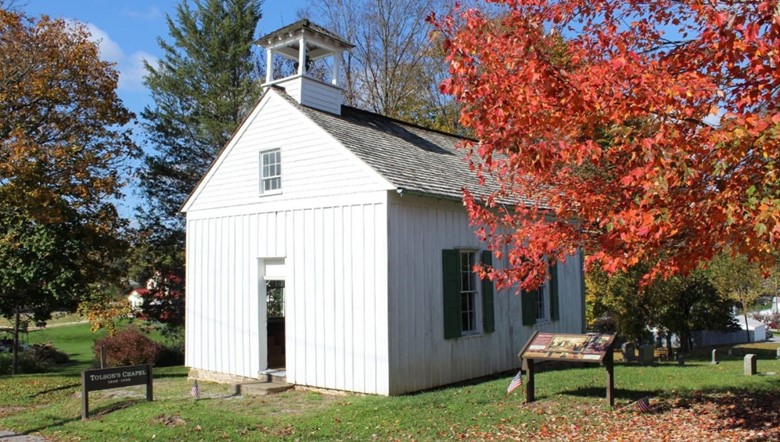 Freedpeople were determined to build communities and to manage their own lives. In this report from August, 1865, only months after the end of the Civil War, a Freedmen’s Bureau Superintendent writes about the progress freedpeople have made, and the school that children and adults attend.

Sir, The following report upon the condition, and state of feeling of St Helena Island is respectfully submitted. The information it contains has been obtained by numerous accidental conversations with the people, by direct inquiry, and by personal observation….

Very many of the freedmen, who three years ago were utterly destitute, ragged, and almost starving, have been able by their earnings to buy themselves from ten to twenty acres of land–a horse, mule or yoke of oxen–a cow–a cart–even good light vehicles for driving–implements–household utensils–clothing to a very considerable amount, and in several cases they have had houses built for themselves in their own lots. I do not allude now to those who were so fortunate as to be able to buy plantations at the first sale of land but to those poorer ones, who have had no chances above the generality.

Such settled prosperity could not be the result of either neglect, or oppression, or pampering, in their management. Protection, with not too much interference in their own plans, has given them all the fostering and encouragement they needed. One of the leading men of the island, who was very destitute three years ago, and who now owns his twenty acres, and keeps his horse, applied to a lady here to ask the cost of hiring a teacher from the north, as the people on the plantation where he lived wished to engage one for their children. When she answered “at least four or five hundred dollars a year.” he said “Well” we can afford it, and we want our children well educated.”

Within the past month a school has been organized, under the direction of Rev. E, Kingsbury, an aged Presbyterian minister from the North…About two hundred children are in attendance daily. A temporary building of “shakes” has been erected, about sixty feet long, which divided into two rooms, answers for a shelter, and only that. This school needs books very much. The teachers speak enthusiastically of their pupils progress. I attended the school one afternoon, examined the scholars, and was very much pleased at the intelligence manifested. Quite a number of adults also attend.